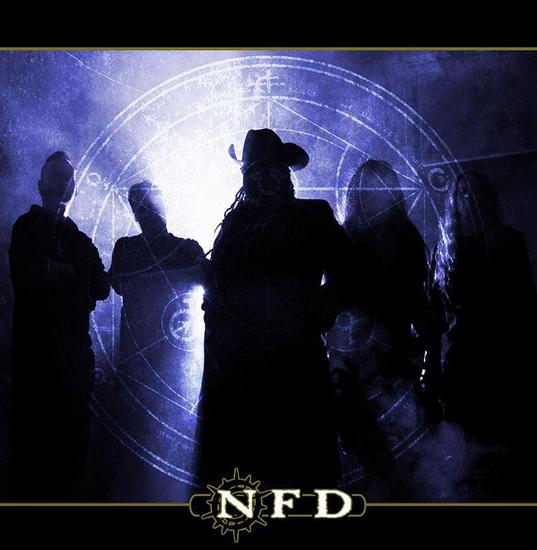 If you take a look at the biography of this British band then it's obvious to use the name of a super band. This group consists of people like James McIlroy (Cradle Of Filth) and Tony Pettitt (Fields Of The Nephilim). After having released three full albums and appearing on lots of different festivals (from Whitby to M'era Luna) the London-based band returns with a brand new mini-album.

I must admit that if it comes to NFD that I'm like a virgin who's touched for the very first time, but as there has to be always a first time (especially for virgins) I'm glad I opened my soul (what else did you have in mind?) for their Goth rock-sound.

I confess that I immediately thought of Fields Of The Nephilim when I heard this. You can blame singer Peter White for this, but then again there's nothing to blame as it's a godsend to hear in 2013 a band that sounds like The Fields. NFD takes you away in a dark atmosphere in where the guitars are king. It's beautiful, dangerous, mysterious....and it's no wonder at all that they're covering One Slip by Pink Floyd.

The only letdown is the short length of this beautiful piece, but for the rest I can only think of one description: good solid classic Goth rock and that says a lot. Tip!

Other reviews from NFD
NFD • Walking The Dead

Same genre: GOTHIC
THIS VALE OF TEARS • This Vale Of Tears
THE BIRTHDAY MASSACRE • Fascination
TWO WITCHES • The Undead
ANTHONY JONES • Farewell To Flesh
JESU • When I Was Small
DAVID J HASKINS • Missive To An Angel From The Halls Of Infamy And Allure
VARIOUS ARTISTS • DARKSIDE OF THE CON III
THE SISTERS OF MERCY • First And Last And Always
ALIEN VAMPIRES • Evil Twin Ep
SIOUXSIE AND THE BANSHEES • Juju