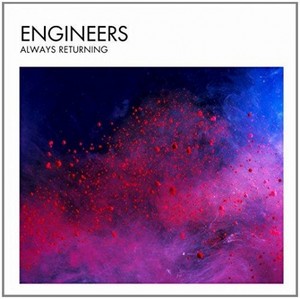 The British shoegaze/ dream pop band ENGINEERS sounds on their fourth album “Always Returning” much more like progressive dream pop band. Biggest problem on this album is the small margin in which the music and the production finds place. It sounds as smooth as a babies bum, but most of the time within the same tempo and built within the same music key.

The dreamy, fitting, (high) male singing isn’t creating any variation as well. The consequence is that “Always Returning” as a whole, initially, sounds pretty dim and boring. In spite of this ENGINEERS has certainly something to offer. Listen for instance to opener ‘Bless The Painter’ in which the guitar sounds pure (as it should be), the nicely built ‘Drive Your Car’ and the cheerful, up-tempo of songs like ‘A Million Voices’ and ‘Searched For Answers‘.

Unfortunately the album is mostly filled with songs that need more power or variation to sound better as they do now. Listen for instance to ‘Fight Or Flight’, ‘It Rings So True’, the instrumental ‘Innsbruck’ and the title track. It’s a pity for this time, but there is enough potential to make a much better fifth album.