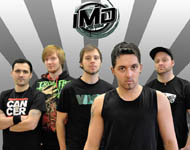 This is clearly a band of whom I have never heard before, but when I start listening to it: weird! It sounds like some regular played songs and yet I can classify it as metal. To start with, it seems to me like a hard mix between Zornik and Offspring. A clean sound and nice voice, where I think one had a bit of work in the studio. The package deal really sounds great! From the start 'My Parade' wakes me up and this is the kind of start I love the most. A bit of melancholy with great guitars and a good drummer, do I need more? The melancholic sound goes on with 'Forever goodbye'. 'Your Disinterest' really sounds like if I have heard it before. Love the piano and the outburst of energy.

'Bittersweet' even starts like a real Def Leppard song and changes into a possible radiohit. I for sure believe in it. Straightforward rock with '1990', followed by a more weeping, hypnotic and a soft cry for a better future on 'The Abandoned'. This is really fingerlicking, alltough I keep on thinking about other world wide known bands with the same sound and feeling.

'Roommates For A Day' even starts with the same guitar sound of the radiohit from Zornik 'Black Hope Shot Down' and if it's not this song than for sure another one of them. This is how the metal version of Zornik would sound like and I love it. A jump later a soft rockballad catches my attention 'Message To An Angel', bittersweet. Same goes for the Bonus track on piano 'Memories': a bittersweet, but good end. Now see how far IMD can go...