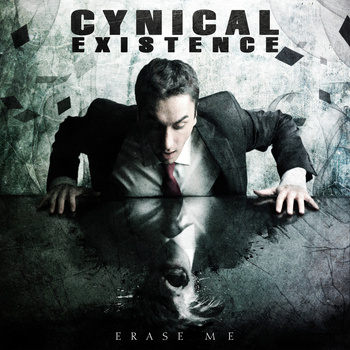 "Erase Me" quickly became the song from CYNICAL EXISTENCE's last album which had received the most club plays... and so DJ's will for sure enthusiastically welcome this new EP offering them some 4 alternative remixes of this title song including an annihilating club mix as well as remakes by IMPLANT, PSIONIC and ANGEL OF GENOCIDE. The Swedish unstoppable machine does not stop its attack there: Fredrik Croona adds a full-frontal assault collaboration with Dräcos von Strecker on "The Lust And Despair", a remake of the album song "Your Decadence My Sins" by label mate Kai Otte as well as a darker and more oppressive bonus song aptly titled "My Private Hell" which might somehow indicates the direction of CYNICAL EXISTENCE's next tortured sonic endeavors... Harsh and loud uncompromising dark elektro the way you all like it!

After the promo talk I directly jump into the right song: love the guitars and the roaring beats! I heard the voice before and once you are into this kind of voices it's hard to hear the difference with others, except if you add some grunting (like here). It's indeed a footstmping clubber that will make you sweat! Love the Implant remix, it has a nice electro sound and a cool vibe!

'My private Hell' could be SHIV-R or Terrolokaust... it's up to you, it's a nice song, a bit slow after all the clubland parties... a great piano and still some nice beats...

If you think this one is more than the other fishe's swiming in the same pool: buy this one...