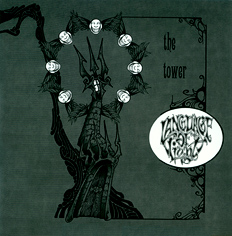 This is a lovely split 7" which holds two tracks, one by Language Of Light and one by Crow Tongue. Language Of Light is R. Loftiss (The Gray Field Recordings) en Frank Suchomel (Inalonelyplace), while Crow Tongue is primarily Timothy Renner (Stone Breath) and AE Hoskin on drums.

The Language Of Light side "The Tower" is comprised of experimental folk, drones, spoken word and samples.

The song starts with a crackling child's voice followed by a duo of voices which pop up and disappear ,followed by a angelic vocals, only for the duo to resurface again at a later time, joined by the instruments, including the violin work of Justin Jones. You could call it a softly swelling single, meaning it goes from gentle sounds to a soft climax. This track is different from the full cd which is more of interest for krautrock and kosmische musik and is an interesting gem.

Crow Tongue's track is "Wind Chant". It's heavily drum based, evoking a sight of a bunch of indians dancing around a windy campfire. Very repetitive, great track, also the vocals remind me a bit of Bain Wolfkind.